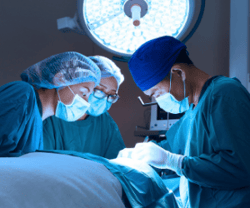 If you require gynecologic or obstetric surgery services in the Waukesha area, you can trust in the experience and expertise of the physicians at Moreland OB-GYN. Offering advanced, minimally invasive procedures focused on helping each individual patient, Moreland OB-GYN delivers compassionate patient care.

Stress Urinary Incontinence (SUI) is commonly treated with surgery to insert a Suburethral Sling, which can be a narrow strap made of synthetic mesh or a strip of your own tissue, that is placed under the urethra. Learn more about this surgical procedure.

Pelvic Organ Prolapse (POP) is usually treated first with nonsurgical options, but if the symptoms persist and are severe, surgical measures can be taken to restore the organs to their original positions. Learn more about Moreland OB-GYN’s Prolapse Repair Surgical options.

Tubal sterilization is a method of female sterilization where the fallopian tubes are closed off through being tied, banded, clipped, sealed with electric current, blocked by scar tissue from small implants, or completely removed. There are three main types of tubal ligation, learn more about the best option for you by following this link.

A hysterectomy is a procedure that removes the uterus from a woman's body. After your uterus is removed, you are no longer able to become pregnant. Learn more about the reasons for choosing a hysterectomy and what the surgery includes now.

A cesarean section birth is the delivery of a baby through a procedure of incisions made in the mother's abdomen and uterus instead of the baby delivering through the vagina. Learn more about Cesarean Section’s now.

If you are experiencing problems of the uterus, a hysteroscopy can be used to diagnose or treat your symptoms.  Below watch a video of Dr. Susan Hunter performing a Hysteroscopy on a patient with a uterine polyp. Learn more about this surgical intervention now.

Video Transcription:
Today, I'm showing you a video recording of a hysteroscopy that I performed on a patient with a uterine polyp. You are now seeing a view of the inside of the uterus. This is with hysteroscopy, which is a small, thin, telescope-like device that's put up inside the uterine cavity. You are now seeing a view of the polyp that's inside the uterus attached to the back wall of the uterus. This is a good view of the polyp right here. The polyp is going to be removed with a device called MyoSure. You can see the MyoSure is being inserted into the uterine cavity right now and I'm going to remove the polyp by using the MyoSure device. This device is a cutting blade that rotates and cuts the polyp up into pieces and sucks them up into a tube that then is saved and the tissue is sent to the pathology department to analyze the polyp. This patient had a lot of bleeding in between her periods. We had performed an ultrasound in the office which showed the polyp and then she was scheduled for this hysteroscopy procedure to remove the polyp. This view right here shows that the polyp is almost completely removed. Just a few more little fragments are being removed now. This procedure can be performed as an outpatient surgery usually under general anesthesia, and the patient can usually return to her regular activities the next day. This is a good view of the inside of the uterus now with a polyp completely removed.

Dilation and Curettage (D&C) may be used to diagnose and treat multiple conditions that affect the uterus. Learn more about this surgical option now.

When menstrual bleeding needs to be reduced to normal or lighter levels, an endometrial ablation disrupts and destroys a thin layer of the uterus lining. Learn more about the techniques used for this procedure now.

Request An Appointment With Our Caring Providers